Water conservation, is something we should always be doing in Utah. During drought conditions, drought response actions are critical. Drought provides a buffer time to responsibly mitigate against critical conditions. Act now so conditions aren't as bad later.

Do the following Drought Response Actions during times of drought. Visit the Slow The Flow page for details.

Drought is a normal and recurring climate feature. Although it occurs in virtually all of the world’s climatic zones, its characteristics vary significantly from one region to another. Consequently, there is no universal drought definition. In general, drought is a result of a deficiency of precipitation over an extended period of time, resulting in a water shortage, which impacts normal water usage. The severity of a drought depends upon the degree of moisture deficiency, its duration, and the size of the affected area. Because it is so hard to develop a quantitative definition for drought, it is difficult to determine precisely when a drought starts and ends.

In the United States, droughts are among the most financially burdensome of all weather-related disasters. In fact, in the 20 years preceding hurricane Katrina, the single largest U.S. weather-related disaster was the drought of 1988, which resulted in over $40 billion in damages throughout the central and northeastern portions of the country. Unlike impacts from floods, hurricanes, tornados or other weather-related disasters, drought impacts are not always immediate. Failed crops can impact food prices well into the future. Devastated domestic livestock and wildlife herds can also take many years to recover.

Drought should not be viewed as merely a natural phenomenon or event. Its impact on society is often a result of the interplay between the natural event (reduced precipitation) and the way society responds with the management of existing supplies. People often compound the impacts of drought through the mismanagement of available supplies. One example of this occurs when outdoor watering restrictions imposed by community leadership are actually perceived by the general public as being premature or unnecessary. Often in these instances, while people comply with the letter of the law, water use actually rises. Consequently, an informed and caring general public is an important ingredient to successful drought management.

Utah’s successful drought management will in large part be a function of leadership providing the necessary information to the public, and people, in turn, responding positively. Utah’s current Drought Response plan was written during the drought of the late ’80s and early ’90s. The plan uses the Surface Water Supply Index (SWSI) to describes five drought conditions. The SWSI is a relative scale with 0 representing average conditions. A positive number indicates that water supplies are above normal, while a negative number indicates that water supplies are below normal.

The first condition, Normal to wet, is really a non-drought condition and the plan merely calls for the periodic updating of SWSI data and maps. When the SWSI moves into the 0 to -1.0 range, conditions are still considered normal, with water supplies only slightly below average. Although this is not a true drought condition it is called “Emerging Drought” in the plan, primarily because of the potential for worsening conditions. During this phase, the plan merely calls for increased monitoring of data. When the SWSI moves below -1.0, the condition is a Phase I Drought. At this point, the state’s Water Supply and Availability Committee is activated and begins to closely monitor water supply data and initiates the dissemination of information to the media and general public. When the SWSI moves below -2.0, it is a Phase II drought condition. At this time, a Drought Review and Reporting Committee and Drought task force are created with members of various state agencies to coordinate drought response actions and facilitate the timely dissemination of data and information. The Governor’s Proclamation of Drought Emergency, rather than a SWSI number, triggers drought Phase III. The Governor’s declaration of drought emergency is the initial and necessary step to make available many of the state and federal drought assistance programs.

Water conservation, is something we should always be doing in Utah. Follow these links to see Indoor Tips and Outdoor Tips.

Tip: Keep a container with water in the fridge so you don't have to run the faucet until it's cold enough to drink!

Tip: Reducing the faucet flow rate in the kitchen below 2.2 gallons per minute is easily accomplished by replacing the aerator. This is a good idea if you often wash dishes by hand in your sink. However, since you may also use your kitchen faucet specifically at times to get lots of water into a container at one time and quickly (into a pot to boil pasta, for example) slowing that rate may be frustrating and provide little water savings. If you are prone to leaving the faucet running unnecessarily, installing an aerator can reduce the water that is wasted.

Fact: Water from your faucet is hundreds of times cheaper than bottled water and tested more carefully for contaminants. It's also better for the environment.

Tip: Fix all leaks promptly and shut off the faucet when it is not in use. Learn more about leak repair here.

Tip: While waiting for hot water to come down the pipes, collect the initial cold water in a bucket to water potted plants or your garden. About 25% of most Americans' daily indoor water use is in the bathroom. If you can reduce your use here, it'll go a long way towards reducing your water use overall!

Tip: WaterSense labeled faucets and aerators are widely available and can reduce the amount of water used in the sink by 30 percent or more. Water utilities frequently offer giveaways and rebates on these products, so check with your water provider to see what's available. Showerheads can wear out. WaterSense-labeled showerheads use 2 gallons per minute or less. A typical showerhead flows at 2.5 gallons per minute or less. The average shower in the United States consumes 17 gallons and lasts just over 8 minutes. Click here to learn more.

Tip: Leaking or running toilets in a single-family home can waste as much as 500 gallons of water per day! Learn about quick and easy toilet repairs here.  New WaterSense-labeled toilets use 1.3 gallons or less per flush and are designed to remove waste more efficiently. Keep your toilet as water-efficient as possible by replacing old and worn out parts. If your toilet was manufactured before 1995, consider an upgrade to a new WaterSense-labeled fixture; it could save you up to 10,000 gallons per year! How old is your toilet? Is it time for a water-saving upgrade?

Tip: Run full loads of laundry for maximum water and energy efficiency. Modern front-loading laundry units not only use less water and energy, they also require a lot less detergent. Don't over-suds your clothes. Use the recommended amount of detergent. In many homes, washing laundry accounts for nearly 25% of indoor use. You can save water by using the proper load size setting on your washing machine.

Tip: Did you know that over half of residential water is used outdoors? Check for leaks, sprinkler head misalignments, broken pipes, and other irrigation system problems monthly. Also reset your irrigation timers four times a year as the seasons change and remember to turn off the system during rainy periods.

Drought response actions are critical actions that need to be taken during drought conditions. See the Drought Response Actions at this link. 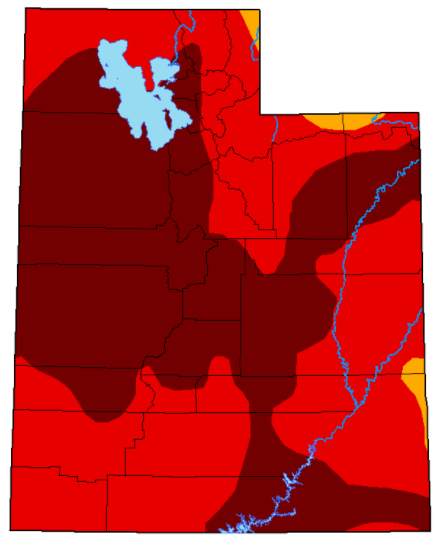 How much water do I use? How do I compare? How can I conserve? Home water conservation is easy once you understand how and where you can use less. The quick and easy Water Calculator shows you which water uses in your home are efficient and which are not and offers simple conservation tips that save water and energy.
Water Use Calculator 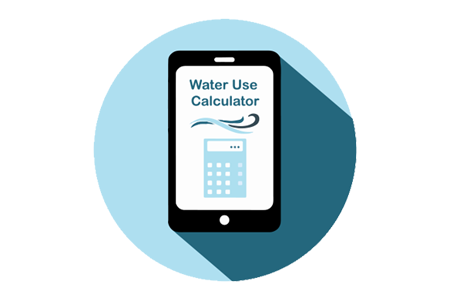 Water is life, use it responsibly. Follow the water conservation tips and drought actions found on the Slow The Flow website.
Slow The Flow

Ready to start saving water on your landscape or in your home? Create a Utah Water Savers account to view cash rebates and programs available in your area.
It Pays To Save

Water Checks evaluate the efficiency of your automated sprinkler system and provide customized irrigation schedules. USU can do a water check for you, or you can use the tools to do your own water check.
Water Check 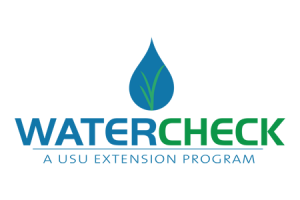